Baby Shark Cereal is swimming into stores, here's where to buy it...
By Patricia Crowley, 1 year ago 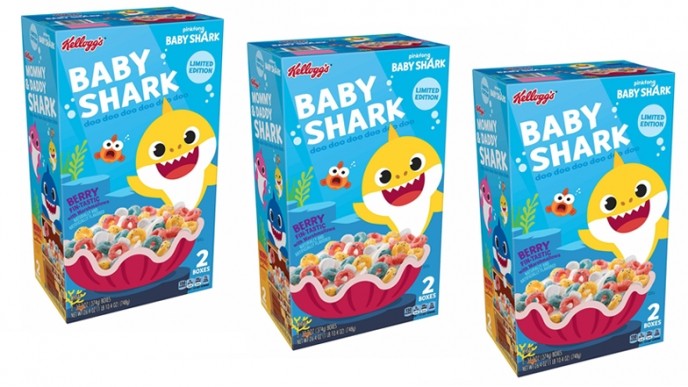 Nowadays anything and everything that goes viral seems to end up on shelves, and the Baby Shark phenomenon is no exception. So far we've seen everything from Baby Shark Bedding to Baby Shark Bath Toys so it was only a matter of time until Baby Shark Cereal came to stores.

Thanks to Kellogg's you'll now be able to buy Baby Shark cereal at your local Sam's Club starting August 17th and in September you'll see it roll out in Walmart stores nationwide.

No word yet on whether the cereal will be available to ship yet for the extra fee from Sam's, but they do have a page up so we're hopeful. The limited edition cereal will be berry fin-tastic flavor with marshmallows and cereal rings colors that match our favorite baby sharks that come in pink, blue and yellow.

So far, it seems like you'll be able to grab a two pack box of these for $5.98 once they go live at Sam's Club, but you can expect single boxes to be sold at Walmart when they become available.

Not a Sam's Club member and want to get your hands on a box? While these will be a Sam's Club exclusive for the first month, expect these to hit shelves in Walmart starting in late September. Don't worry, when it does hit shelves nationwide at Walmart we'll send out a reminder and keep you posted.

Best of luck getting this song out of your head while your kiddos are singing while eating breakfast!

SAMS CLUB COUPON: Browse the Sams Club sale for 20-40% off